The making of the film Wicker Man

The film Wicker Man was a truly astonishing film, although it was clearly not to everyone's taste. Indeed, the first time I saw it I thought it was seriously weird. Now it is being re-released on its 40th anniversary.

The London Daily Telegraph has his report that is worth reading. Go here.

Here, the Guardian examines how remarkable story of how the film was made:

How we made The Wicker Man 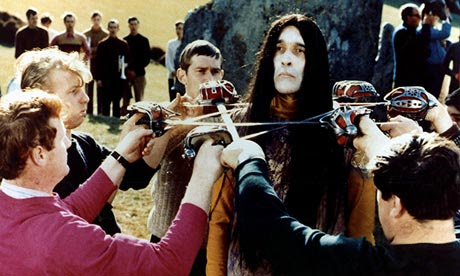 Incantations to the gods … Christopher Lee in The Wicker Man. Photograph: Sportsphoto Ltd/Allstar

I was making commercials in the US and doing very well. Then a film company sent the writer Anthony Shaffer out to lure me back to the UK. When I opened my door in Manhattan, he said: "I am with the FBI and we are investigating you to see if you have communist sympathies." It was the first of many jokes.

We spent a weekend devising the plot, about a policeman called Howie who is lured to a Scottish island to investigate a missing girl; he is ultimately sacrificed by the pagan locals to save their apple crop. Paganism gave us lots of ideas, like the little girl being given a frog to put in her throat to stop it hurting. Essentially, one must think of The Wicker Man, as a game, with clues gradually suggesting Summerisle is not run in accordance with Christian values of Howie. Setting it in Scotland was crucial: in the early 1970s, Christanity was still widely practised, and it had a very puritan aspect. It might not have been as believable set in Woolwich.