The story about, and the story behind, God's Triangle 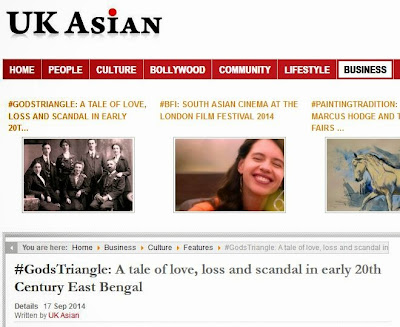 GodsTriangle: A tale of love, loss and scandal in early
20th Century East Bengal
From  UK Asian September 2014
For the curious there's nothing quite like flipping through old family albums, delving into the past, exploring the stories of the men and women who went before.
Ian Richardson is blessed with shiploads of that particular kind of curiosity.
The former BBC journalist's curiosity was piqued no end one later winter's day in 1997 in his hometown of Melbourne, as he helped his recently-widowed mother sort through some old family photographs.
One photograph in particular caught Richardson's attention, one that would culminate, some fifteen years later, in 'God's Triangle', an extraordinary story about sexual and religious politics, cover ups and nefarious intrigues in early 20th century Australia and India. 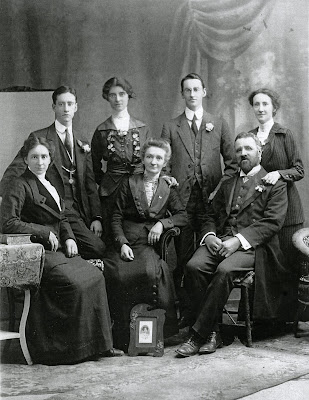 Florence Cox (Standing 2nd from Left)
At the heart of this fascinating story are three even more fascinating characters, all Australian missionaries: Florence Cox, Richardson's great aunt, who was affectionately known as 'Florrie'; her husband the Reverend Frank Paice and Olga Johnston, one of the bridesmaids at Florrie and Frank's wedding.
In October 1912, Frank Paice left Melbourne for East to join the scores of Baptist missionaries who were attempting to spread the word of god in the then-wilds of what would become Bangladesh.
When not preaching, the missionaries were doing yeomen work in some of the sub-continent's poorest and most deprived communities.
Frank had recently become engaged to Florrie, then aged 24.
Florrie had a certain languidness to her, unusually tall in comparison to her contemporaries and devoted to her work.
She would join her new husband in Calcutta, some two years later.
Their marriage however, endured - for a lack of a better word - in the malarial swamps of the Bengal, culminating in a scandalous divorce after five years: scandalous for numerous reasons. 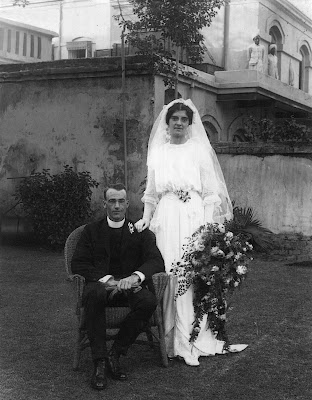 Above: Frank Paice and Florence Cox pictured after their wedding in Calcutta
The astonishment that greeted this devoutly Christian couple's divorce was matched decades later by the evasiveness shown by Richardson's mother in 1997 as the journalist asked after 'Great Aunt Florrie'.
"The first thing my mother said when I asked about Florrie was, 'Oh we don't talk about her'.  She became visibly embarrassed and evasive", Richardson says.
"I'd been a journalist for all these years so I wouldn't let it go.  I pressed and pressed and she said that Aunty florrie had been a missionary around the first World War and had married a missionary as well.
"And during that marriage, her husband had become involved with another woman who was also a missionary.  I was only a little girl and no one talked about it.  Initially I thought it was an interesting sidebar story.  But what I found out was astonishing".
Whilst divorce among missionaries, in a largely conservative world was more than just unusual, the fact that the divorce had then been kept a secret was even more intriguing, a fact merely exacerbated by a mysterious illness that, Richardson would later find out, had afflicted Florrie: a condition that had had a direct impact on the marriage and one which would later lead to Florrie being ostracized by her family and community.
"The first point for me was that no one had talked about the divorce there was no information about it", Richardson continues.
"When I approached the Supreme Court of Victoria about it, they would not show me the file, which was quite remarkable.  I thought it was very odd and they were quite adamant that they not give me the file because they said that the judge at the time of the divorce had ordered for the file to be closed for all time.  Well that really did get me curious."
The resolute Richardson pressed on.
"The battle with the Supreme Court was a long one but the people in charge understood why I wanted the information and I think they sympathized with it.  It was a piece of Australian history and church history.  I nagged them and nagged them over several years until they got so fed up with me and said I could make an application to the Supreme Court.
"To my astonishment, the judge approved the application."
The file would start a remarkable hunt.
When Frank and Olga's affair became known, both were forced to resign.
Florrie, too, returned to Melbourne and found that she was suffering from a very rare gender condition which may have impacted on her marriage. After the divorce, Frank and Olga went to Calcutta where they were married in a discreet civil ceremony.
"Florrie never knew what was wrong with her.  She grew up in a very religious Protestant family in an age when sex was a totally taboo subject.  The first Florrie knew that something was wrong was on her honeymoon when she and her husband were unable to have intercourse.      The marriage never recovered from that.
"Florrie went to her grave in 1950 thinking she was some form of freak, getting little support from her embarrassed family or from the equally-embarrassed Baptist Church in Australia. Her actual condition was not given a name until after she died."
Remarkably, the press was also told to ignore the whole affair and the file on the divorce ordered by a judge to be closed for all time.
Florrie was shunned by her family who failed to understand the burden she had faced and following the general norm to blame the woman for the breakdown of the marriage.
Frank and Olga in the meantime had returned to Bengal for different work - Frank had taken up an engineering management job - before returning to Australia as upstanding members of the community. 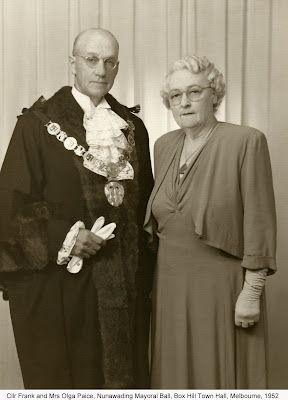 Above: Councillor Frank Paice and Olga later in life.
In Australia that standing would reach phenomenal heights: the couple becoming regular fixtures in the social scene in their town and becoming prominent in civic society.
The past was buried.  No mention was ever made of their time in India and, in particular, Frank's first marriage.  Not even their only son and close friends knew of their missionary past.
'God's Triangle' is made up of a series of diary entries as Richardson travels to Calcutta and Bangladesh.
His curiosity and journalistic skill shines through as he trawls through myriad troves of documents.
During his research, Richardson also discovers that Frank and Olga had a son, Paul, who aids in Richardson's search, astonished at the double life his parents lived.
The cover up is arguably the biggest aspect of the story.  How was it accomplished and who ordered it covered up?
"This is a story that had everything.  It was scandalous.  How did Olga and Frank hide their past?  I think that was amazing.  I mean they were so prominent in suburban Melbourne society.  How did they manage to get away with people not asking about six missing years in their lives?
"Above all though, it was a cover up."
Richardson suggests that the Baptist church - aided by the ever-present freemasons - went to elaborate lengths to sweep things under the carpet.
Despite its diary-like style, the book is gripping, not least due to Richardson's meticulous attention to the tiniest details.
At just over 150 pages long, it's not a big book by any means but it is crammed with information, shedding light on everything from the religiously conservative community that all three main characters hailed from to the remote part of East Bengal where carried out their extraordinary work.
It's a book about religion and the dichotomy of the yeomen missionary work carried out by the likes of Frank, Florrie and Olga and the all-pervasive power of a church with medieval ideas about sexuality and personal freedoms.
Above all, it's a book about tolerance and justice for a woman who was unfairly marginalized for a reason that those were doing the marginalizing had little understanding about: a problem that continues to blight humanity.
Unsurprisingly, a story with such universal themes has caught the attention of a number of filmmakers.
West London-based Richardson is in the final stages of scripting a multi-million dollar film project based on 'God's Triangle'.