A mystery solved, but only after a long investigation

I was mystified why my mother, then living in Melbourne, Australia, wasn’t keen to talk about my missionary great aunt Florence “Florrie” Cox, whom we found pictured in this old photograph. My journalistic curiosity set me off on a 10-year investigation that led to my battling the Victorian Supreme Court in Melbourne to gain access to Florrie's divorce files which had been mysteriously and uniquely marked “Closed for all time”. 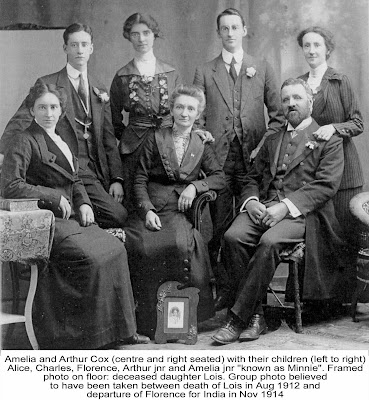 When the file was eventually shown to me, I discovered that my aunt had a very rare gender condition that had passed unnoticed in an era when the discussion of anything related to sex was considered a total taboo.

An affair by her husband with a fellow missionary caused such scandal that the Australian Baptist Church, with the co-operation of the court, the Freemasons and the media, mounted a hugely-successful cover-up.

My account of the investigation is revealed in God’s Triangle, available here in paperback or Kindle ebook: http://www.godstriangle.com/
Posted by Ian D. Richardson at 18:02