"Ian Richardson has written a page turning thriller that screams to be turned into a blockbuster film. It has all the ingredients and characters to make a box office success. A flawed foreign correspondent, troubled by a gambling addiction, a penchant for exotic escort girls and drinking whiskey from the bottle; his old, avenging school chum, who becomes the world's most wanted terrorist, and a duplicitous, immoral spymaster who manipulates the reporter with devastating consequences. Their personal epiphanies come far too late. To say any more would spoilt the plot." Amazon review by Malcolm Brabant.

"A labyrinthine tale with a blinder of an ending. Heart stopping stuff. I am glad you didn't tell me how it ended before I began reviewing it." - Jan Woolf, editor, London.

"Oh how I enjoyed it! I could just see it all happening. I could hear the chaos. I could smell the horror. I cried for Felicity and the children. It's been my New Year's reading pleasure. I will read it again." - Christine Bett, Ballarat, Australia.

"The Mortal Maze is entertaining, fast paced with well drawn believable characters, and is well worth a few hours of anyone's time. In fact, it's something of a page turner and difficult to put down; I read it in two sittings. Written by an author not unfamiliar with the troubles and tribulations of TV journalism in foreign lands, it has a genuine feel for the sometimes problematic relationships between journalists and diplomats as well as the demands of the editors back home and the realities on the ground. I had to smile at the groans from the journalist 'hero' and his irrepressible cameraman when HQ in London sends in the self important 'heavyweight' as the story develops in significance. I look forward to a follow up." - Ben A. Amazon review.

"I thoroughly enjoyed this well researched & very well constructed fast moving topical thriller. It is full of twists & turns & had me gripped from the start to the climactic finish. I would love to see it made into a film!" - anon, Amazon Customer

"A well-plotted novel packed with incident and featuring sharply drawn relationships between some convincing characters, this lively and topical thriller fairly zips along from the start, gathering pace until the dramatic finale. The author makes the most of his journalistic background without overdoing the use of an insider's knowledge of technical detail and jargon." - T. Luard, Amazon review.

"A terrific fast-paced read! I was well and truly hooked from the start. I loved the feisty characters and loved loathing one or two of the BBC high-ups. A great insight into what goes on behind the news in dangerous territory. I recommend." - Carole Bentley, Amazon review.

"The Mortal Maze was part of my holiday reading - and a very good part it was! I particularly enjoyed the frictions and conflicts between the resident members of the BBC's news bureau team and the special correspondent followed by the relief manager who were flown in to work at the bureau. I also very much enjoyed the way the relationships between the members of the bureau team itself were portrayed. As well as these, I found Ian Richardson's storylines were most compelling... though some were more than a little sad." - Amazon review by Peter Udell, London.

"Fast moving and thoroughly enjoyable. An excellent insight into the way news works, some of the unpleasant people who work in it and the strong professional rivalries. Plausible plot - who are the Government spooks in the broadcast organisations? I was so hooked that I got through the last 20 minutes according to Kindle in 12 minutes because I wanted to find out what happened." - Amazon review by JRExelby.

Buy The Mortal Maze here
Posted by Ian D. Richardson at 14:21 No comments:

Why readers are attracted to this true detective story 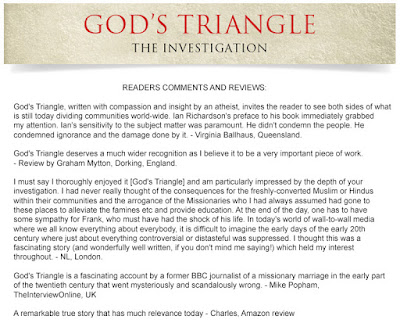 
A question: how many  family photographs will survive our digital age?

There was a time, not that many decades ago, when taking a photograph was an event from which the results were treasured. Families would have a Kodak Box Brownie or maybe, as I did, a clunky East German Praktica 35mm. Most of the photos would be in black-and-white or sepia, although with the growth of 35mm cameras, a treat would be to buy a roll of Kodachrome colour transparency film.

Special events, such as weddings and the birth of a child in the family, would occasion the services of a professional photographer or perhaps a visit to a photographic studio with its massive lights and camera. The photographs from these sessions were archival quality and became proud possessions to be passed on from generation to generation.

The rot began to set in when cheap cameras, 35mm colour print film and one-hour processing began to dominate the market in the 1970s and 1980s. Colour photographs became the norm and began to lose their value as a means of permanently recording our lives pictorially.

Extra prints were sometimes ordered for friends, then the negatives would probably be binned. Worse – and this is something few people realised – these colour prints were prone to discolouring and fading and had little or no long-term archival quality.

It is safe to estimate that billions of digital photographs are now taken around the world each day, the majority of them on smart phones, but how many will survive to take their place in a family’s historical record? Almost none.

Some of these photographic efforts end up being emailed to friends and family, or are posted on Facebook, Twitter, Instagram, Flickr and other social media outlets, but are very rarely turned into prints that can be held in the hand and admired, or put in a frame or even a photographic album.

The irony is that the technical quality of the pictures taken on digital cameras and smart phones is exceptionally high, but not by the time they are transferred to the social media. They may look good on a computer, but they can’t be printed in good quality.

From time to time, I get interesting family photographs emailed to me, or they are posted on Facebook, and I ask for high-definition copies so that I can produce good quality prints and add them to my family history archive. I rarely get them, either because they have been deleted, or the photographers can’t figure out how to process them in top quality.

A friend of mine fires off the camera in his iPhone at every opportunity, but when I ask him what happens to all the pictures, the short answer is that they are mostly lost whenever he upgrades his mobile phone or computer, something that he does quite frequently.

This takes me onto another bugbear: identification of photographs. Almost since photography was popularised by the likes of Fox Talbot and George Eastman, there has been a failure to identify the who, the where and the when on a photograph.

It is sometimes a tedious task, but all my saved photographs are identified, usually with a caption added when I process them through my Photoshop, or similar, software.

This often prompted ridicule on the part of my family and friends, but I am delighted to report that I am gradually winning them over. Initially, when I showed them a photo with a name, location and date on it, I would be told “But we know all that!”

My answer is “Well, you know that now, but I bet you won’t remember the date in a matter of months. You will be a bit hazy about the location in a few years, and a few years after that you won’t be entirely sure who all the people are. This has proved to be true in many cases.

Some years ago, during a visit to my mother in Australia, we found a box of old photographs in the top of a wardrobe. It was a goldmine of family memories, but not without its problems. The colour prints were mostly faded, and while the black-and-white and sepia photos were generally in good condition, almost none bore any identification.

We spent hours working our way through the photographs, using a soft pencil to write names, and where possible, locations and approximate dates on the back of each one.

As we worked our way through the collection, my eye was caught by a family group photograph taken in a studio in Melbourne in 1914 around the time the First World War was getting underway. The group included a woman I had never seen before.

My mother identified the woman as my Great Aunt Florence “Florrie” Cox, and under my cross-examination, she very reluctantly revealed that Florrie had been a Baptist missionary in East Bengal (now Bangladesh) and had innocently been caught up in a terrible scandal that had shamed the family in Melbourne.

I had originally thought this would be a marginal family history episode, but the more I learned the more I realised that I had a book in the making. This was published as God’s Triangle. Had my mother not had such a clear long-term memory, that old photograph would not have been identified and the fascinating story of God’s Triangle would have remained untold.

While I fear for the future of our family photographic history, new and cheap printing opportunities have emerged in recent years as a benefit of digitisation. It is now possible with fairly basic computer skills to design a photobook that can be printed by a commercial company for as little as £10, although £40 is a reasonable expectation for larger books with hard covers.

Photobooks have an advantage over the old photographic albums in that the photos do not become unstuck and fall out over time. So, while I fret that so much of our pictorial history is being lost, never to be recovered, it is not all depressing news.

REVIEW
Ian Richardson, a former BBC journalist, was curious about his family history, and in particular his mysterious and rarely mentioned great-aunt Florrie Cox. He embarked on a journey in search of the truth. What followed was a shocking tale of what might most generously be described as institutional ignorance as he tracked down the truth. Richardson was ruthless in his pursuit of the facts and uncovered a horrifying account in which no one came out favourably.
Richardson’s research took him through the Australian Supreme Court, the archives of the Baptist church and Indian missionaries and uncovered a shocking catalogue of betrayal and collusion by some of the authorities whose very responsibility should have been to protect his great-aunt Florrie.
God’s Triangle resonates particularly today – a time when our understanding of androgyny is still developing and an era when we are discovering quite how brutally un-Christian the behaviour of church authorities has been. It will appeal to lovers of a thriller, those with an interest in Australian social history, and the role of the church, and anyone who has ever thought to question their own family history. It reads well, and Richardson is exhaustive in his detail and historical accuracy.