God's Triangle update: how a lost grave was found.

Soon after I started researching my book God's Triangle some years ago, I began the hunt to find the grave of my great aunt, Florence Martha "Florrie" Cox, the central character in this true story.

It was easy to establish that she was buried, along with her parents, Arthur and Elizabeth Cox, in the Boroondara (Kew) General Cemetery, one of the oldest cemeteries in Melbourne, Australia. The cemetery was able to provide me with the grave number and the fact that it was in the small Primitive Methodist Section, but I soon learned that it bore no memorial headstone or any other form of identification.

During visits to my homeland, Australia, over the years I made a number of unsuccessful searches of the cemetery for the grave. Then I struck it lucky: I discovered the wonderful people in Friends of Boroondara Cemetery. They got digging (so to speak) in the files and found the grave some distance away from where I have been vainly looking for so long.

I am now delighted to report that Florrie Cox's grave no longer lies unidentified and untended. Last month, there was an informal plaque-laying ceremony, attended by the Friends president Pauline Turville and secretary Elaine Race, my cousin Alan Cox and wife Elizabeth, my cousin John Mole, and myself and wife Rosemary. As you will see from the photograph, Pauline and Elaine had kindly tidied the grave in advance of our little ceremony. 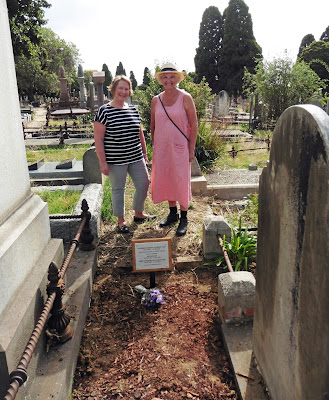 It is no wonder that I couldn't find the grave. The photograph above shows how it was squeezed between two rows of graves in what I suspect was originally intended to be a footpath. I have not been able to establish why the grave was left unsealed and unmarked. After all, when Florrie died in 1950 and was the last person to be added to the grave, three of her siblings were still alive and should have been able to arrange for it to be sealed with a memorial added. The fact that it wasn't is a mystery and will probably remain so.

Next step is to establish the cost of permanently sealing the grave. I hope this work can be carried out before too long. Meantime, CLICK HERE to read a very nice article (with a stop press) from the latest edition of the Friends of Boroondara Cemetery newsletter.
Posted by Ian D. Richardson at 20:55 No comments: