When women were known only by their husband's name

When I was a young man in Australia, my family owned several small rural weekly newspapers, the main one being the Tribune, which was printed in my home town, Charlton, Victoria. I have the good fortune to have electronic copies of all Tribune issues between 1943 and 1961, the period of our family ownership. It is fun to go through them sometimes to be reminded of old friends and associates and of events that shaped the town with its population of about 1000.

I came across the items below from issues published in 1961, and it struck me that both the women in the stories were referred to only by the full name of their husbands. At no point were the women's first names given.  I was reminded that back then this was the normal practice.

My mother was always referred to as Mrs John Richardson until after my father died in 1954. From then on she became Mrs R. M. Richardson or occasionally, Mrs Rena Richardson.

Although my mother was a feminist by inclination, she refused to be described as such. I know that it never occurred to her that there was something odd -- wrong even -- about the naming of married women in newspapers or in the minutes of meetings she attended. Indeed, the items below were written during her time as editor of the Tribune. And if there were a number of married women mentioned in a story she referred to them collectively as "Mesdames Brown/White/Black/Jones" etc etc.

It was very rare for a married woman to insist that she be referred to by her birth or maiden name. However, when I worked for BBC World Service News between 1969 and 1996, the majority of married women on the staff were not known by the names of their husbands. This was partly because the women had started working for the BBC before they were married. Occasionally, the newsroom would receive a phone call asking to speak to a female member of staff by her married name and would be told "We don't have anyone of that name working here."

It is impossible to pinpoint the period in which is became unacceptable to refer to women by their husband's full names because it would have been a gradual change taking place at different paces in different locations and communities.

I do know a very conservative woman who is adamant that she should be known by her husband's name, and if she receives a letter addressed to her by her first name she returns it unopened. No surprise then that she does the same for any letters that insults her by referring to her a "Ms" rather than "Mrs". She is horrified that many married women do not change their name to that of their husband. 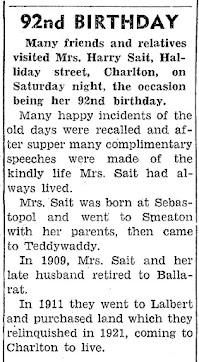 PS: I have since learned that Mrs Harry Sait's first name was Mary and that
Mrs Con Fanning was Linda.

It should go without saying that the naming of spouses in Asian, African and other cultures can be quite different and is another story, or stories.