The publicity about the Netflix remake of the political thriller "House of Cards reminded how much I enjoyed the original BBC series featuring my fine actor namesake, Ian Richardson. I was working at BBC Television Centre at the time and much of his fanmail came to my office without any indication whether it was for me or the actor until it was opened. I would forward the fanmail to the other Ian and we exchanged several friendly letters, although we never met.


Not ever having received fanmail in my own right (why the hell not?) I found some of the other Ian's mail amusing. My favourite was this one from a young man in Kent who thought Ian's character -- the evil, manipulated Francis Urquhart -- was a man to be admired:


"Ever since I was eleven years old I have been interested in Politics. The Character you play, Prime Minister Francis Urquhart, is I feel is quite excellent. I want to become Prime Minister when I grow up and it is your character that has given me added inspiration to go for my goal. I would be very greatful [sic] and most happy if you would perhaps send me your Autograph or perhaps a signed Photograph of yourself. I really admire you Mr Richardson as Francis Urquhart."

I have Googled the writer of the letter and I am happy to report that, so far at least, he has failed in his ambition to become a politician, let alone Prime Minister. Indeed, I can find no trace of him at all. He seems to have remained in well-deserved obscurity.

LATER ADDITION: After writing this post I was reminded that there was one other particularly amusing fanmail letter for Ian. It was from an American with the surname Urquhart and suggesting that he was probably related to Francis Urquhart. He seemed to be under the impression that the House of Cards was a documentary, rather than a work of total fiction.
Posted by Ian D. Richardson at 21:17 No comments:

Just before Christmas, I posted a fairly routine tweet about Dame Edna Everage appearing on BBC Radio Four's Today Programme. Now, after all this time, I get this message (see below). Can there be any greater honour for an Australian? 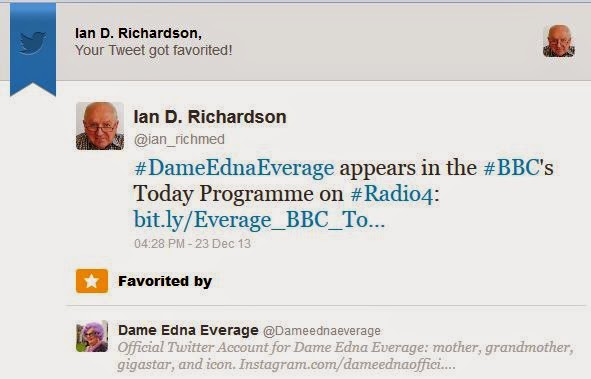 Top of Form
Back in the Dim Dark Ages (the 1970s) I used to freelance as the London correspondent for Australia's TV Week magazine. I got to know Barry Humphries a bit before he became seriously famous outside Australia. Sometimes when I would ring him, "Edna" would answer the phone and tell me that "Mr Humphries is busy just at the moment, but he will call you back as soon as he is free" -- and he would, returning the call as himself.

We would sometimes chat about his Private Eye strip, The Adventures of Barry McKenzie, and make up deliberately-crude Aussie sayings. One of these, I remember, was "Go stick your head up a dead bear's bum".

On one occasion, at a social function in London, Barry/Edna agreed to do a radio interview (for 3AW, Melbourne, I think) and the only quiet place we could find was the men's toilet. Fortunately, no-one burst in on us during the interview, as there would have been a lot of explaining to do.

Barry never liked being interviewed as Edna unless dressed in character. However, on this occasion I remember that he was wearing a dinner jacket. I wish I still had that interview, but it was back in the days when 1/4" recording tape was expensive and was bulk erased after being broadcast.
Posted by Ian D. Richardson at 14:52 No comments: