A PHOTOGRAPH THAT NO-ONE WAS SUPPOSED TO SEE 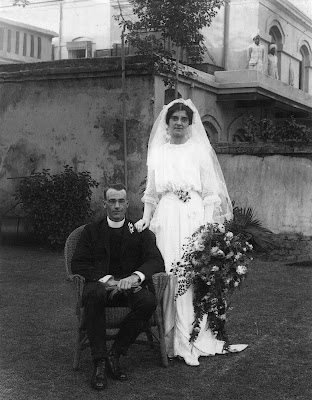 As a keen genealogist I have many family photographs that I regard as “special”, but this one is particularly so because I wasn’t supposed to see it. Nor were any other descendants of the bride and groom.
The couple were my great aunt, Florence “Florrie” Cox, and the Rev. Frank E. Paice, on the day they were married in the Circular Road Baptist Chapel in Calcutta (now Kolkata) in December 1914. Both were Baptist missionaries from Melbourne, Australia, and went on to be stationed in East Bengal (now Bangladesh).
The marriage, which began with high hopes in both families, fell apart in scandal. This was partly because Frank had developed a fondness for a fellow Australian missionary, Olga Johnson, but the greatest contributing factor was the discovery on the honeymoon that Florrie had no vagina.
Florrie had what was identified after her death in 1950 as Androgen Insensitivity Syndrome (AIS). She looked and felt that she was a woman, but had male chromosomes and no internal female organs.
The marriage took place in an age when sex was a taboo subject in strict Christian families. It was quite common for females never to be told in advance about menstruation. In Florrie’s case, she was never aware that mature women should be having periods. Nor did Frank know this until much later.
In my years of research into why the marriage ended in a covered-up annulment divorce, I found few photographs of Florrie and no photographs of the wedding. That is, until I met a distant cousin who had been researching a different branch of the Cox family.
The cousin showed me a postcard copy of the photo accompanying this article, but had no clue who was in it, other than the words “Florence and Frank 1914” written on the back. We came to the conclusion that this was probably the only copy in existence because all the others had been destroyed by the more immediate family members of Florrie and Frank.
After the divorce went through in a secret session in the Supreme Court in Melbourne, Florrie led a quiet life, often battling depression, and regarded by her family as an embarrassment. Frank went back to India, married Olga, became a pillar of the engineering world in Calcutta, then returned to Melbourne years later to be prominent in local government. Both he and Olga died in the 1960s with very few people – not even their only child – knowing about the scandal or that they had ever been missionaries.
One question that is frequently raised by those who see the wedding photograph: “Why is Frank sitting while Florrie stands?” One answer was that he didn’t want it to be obvious that he was shorter than his bride. But there are also suggestions that the photographer wanted the focus be on the bride, allowing her to display her wedding dress and her bouquet to their best advantage.

The investigation by Ian Richardson into what happened to
Florrie Cox and Frank Paice is available here:
https://www.godstriangle.com/
Posted by Ian D. Richardson at 12:22 3 comments: