Someone - I don't know who - came up with this amusing Aussie road sign. It is meant as a joke, but there is a significant element of truth in it. When my siblings and I grew up in the bush in south-eastern Australia, we learned very soon to be wary of snakes, particularly in the warmer weather. It was also in the age of outside "dunnies" (Australian term for lavatory/toilet/loo) and we knew to always check under the dunny seat to make sure there were no poisonous red backed spiders lurking there.

Later, when I moved to Melbourne, light aircraft sponsored by local radio stations kept a watch on hot days for sharks swimming close to the many local beaches, but at least Melbourne wasn't one of those parts of Australia populated by crocodiles happy to have a human snack. 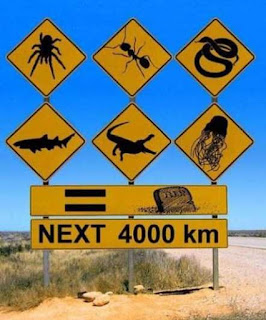 This sign prompts me to link to my earlier posting about whether the land of my birth is relatively free of crime and other social problems. The answer in a word is "no". Read on to discover the proof of my claim: Godzone & crime.
Posted by Ian D. Richardson at 17:44 No comments: